In 2017 the Mezza Luna Restaurant is celebrating 80 years under the same family ownership. Therefore, we feel a brief history of how the Mezza Luna evolved is in order. Besides, the history of the restaurant is quite interesting. It all began in 1937, when an Italian woman named Speranza Cubellis, who was in the produce business at the time, decided to move with her husband Leonida Cubellis and their five children, Emilio, Louise, Sylvia, Guido, and Gildo to Buzzards Bay, Massachusetts. 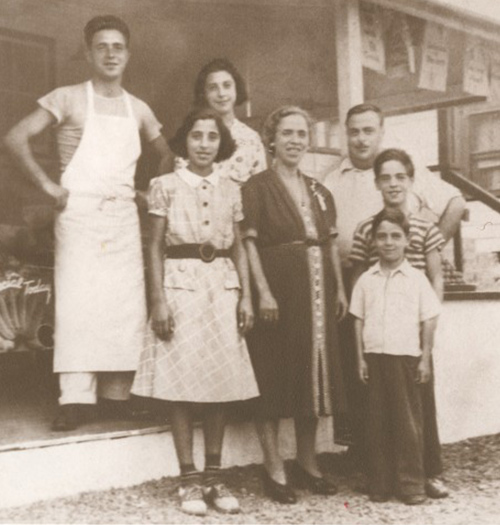 Prior to this, Speranza had her business in Woonsocket, Rhode Island, but at this time, the produce business on Cape Cod was very profitable, so moving here was a wise investment. They rented a building for fifty dollars a month. The building was so old that when it rained, more water came inside than outside. In three days, they set up a fruit stand. The business was tough. Main Street was a four-lane highway and people had a hard time parking their cars because of how close the fruit stand was to the street. Then WWII broke out in 1939 and produce, like everything else, was scarce. Luckily, Camp Edwards was in use and the Cape began to develop and prosper. At this time, with so much construction going on, many construction workers needed places to stay, so Speranza began taking in borders, and as the old saying goes “what’s a good hotel without a fine eating establishment?” Speranza and her old-world recipes began to serve meals to the borders, travelers, military, and anyone else who wanted a home-cooked meal. Don’t forget spaghetti and meatballs at that time were only 35 cents. Imagine that!

Throughout the years, much reconstruction was done. The dining rooms and the Hickory Room Lounge were, at one time, where the Cubellis family resided. And then as time went on, the Cubellis children got married and had children of their own, and they lived here too. Eventually, the restaurant was expanding and so were the families, so Speranza purchased the land surrounding the Mezza Luna so that her family would have places to live and land to build houses on, and this is exactly what they did. Now if you are wondering why the place looks so new, it is because the face of the Mezza Luna was drastically altered on October 20, 2007, when a 7 alarm fire ripped through the building and the Mezza Luna burned to the ground. The Cubellis family struggled with the loss tremendously, but with the unconditional support from everyone in our family and in the town, we rose to the challenge of rebuilding our restaurant. It was a long 15 months, but we did it.

Although the old Mezza Luna could not be recreated, we were able to salvage some of the old building and use it in the rebuilding process. We also tried to recapture some of the old nostalgic atmosphere, but it is not easy to recreate 70 years. In the end, the building is new, but the family, the recipes and the staff of the Mezza Luna stayed the same. Actually, the family got bigger. On November 1, 2007, ten days after the fire, Emilio Thomas John Cubellis III, my son, was born. Emilio’s arrival shed a light on our family during a very tough time. He was a sign of inspiration for all of us. Presently at the Mezza Luna, we are in the third generation of ownership, and everyday we carry on the tradition of Nona Speranza by using the same recipes she used for her sauces and bread. But most of all, we want to give you the same treatment today that Speranza would have given you in 1937, authentic Italian entrées, impeccable hospitality and to feel like you’re at home. Welcome & Welcome Back, Emilio John (E.J.) Cubellis II Chef & 3rd generation owner.

Call Now
Back to the top